Has Your Loved One Suffered Physical Abuse in a Nursing Home? 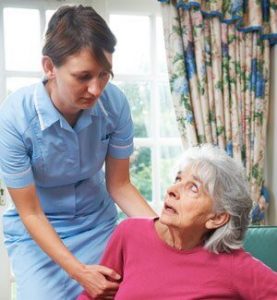 Abuse is defined as the cruel or violent treatment of another person. In the context of nursing homes, such abuse takes many forms. Although in an ideal world there would be no abuse at all in patient care facilities, and in some places there is in fact no discernible abuse, in others abuse is rampant. Statistics demonstrate that senior citizens that are abused have a much higher rate of early death than others. According to some reports, one out of every three nursing home residents report being the subject of abuse at one time or the other. Abuse takes many forms, but physical abuse is considered to be the most common.

There are many types of abuse that are difficult to spot or identify. For instance, psychological abuse or financial abuse cannot easily be seen by merely looking at the nursing home resident. On the hand, physical abuse of a patient often (but not always) leaves tell-tale signs that an abusive event has occurred. Some of these signs may include:

Family members should remain on guard during each visit for such signs, regardless of whether the facility is highly-rated and without a history of complaints. Although some medical staff employees remain at their positions for long time periods, many others come and go. There is no telling when a new “bad apple” employee may join an otherwise professional team.

But who are these people that abuse nursing home residents? Generally, they come from three different groups which include:

Some of this physical abuse grows out of frustration due to under-staffing, lack of sufficient resources, and a failure to properly train the medical staff. Other times, the caregiver is in fact simply a bad and malicious person. The abuse is unintentional in some situations as well. Yet, regardless of the source, there are no circumstances under which physical abuse can be tolerated.

This type of abuse may be intentional or unintentional. Sometimes, the caregiver is purposely failing to provide the care necessary for the patient to thrive, while other times, the failure to provide proper services is due to a lack of proper training or a lack of necessary resources. When neglect occurs, basic necessities that are required for the maintenance of dignity and survival are withheld or not provided. These may include:

There is a place for physical restraints in nursing homes, but only under certain very limited medical conditions. Even during such situations, restraints are to be used for short and specific periods of time. To do otherwise is in violation of Federal Nursing Home regulations and laws. This is because the extended use of restraints often leads to injury as nursing homes patients understandably struggle to free themselves of such confinement. Under no circumstances should physical restraints ever be used for the convenience of the medical staff or for punishment purposes. When this occurs, the use of restraints is not only improper and medical malpractice, but may be criminal in nature as well.

This is the type of abuse that people most often think of when they consider nursing home abuse. It may involve a patient who is hit, punched, slapped, pinched, kicked, sexually abused or otherwise physically violated. This type of physical abuse is intentional and can often be discerned from the physical appearance of the nursing home resident. It is also often the most serious and may lead to very serious permanent injury or wrongful death.

For more than twenty-five years, the experienced, caring and knowledgeable attorneys associated with Sexner Injury Lawyers LLC have been helping nursing home residents and their families hold others accountable for injuries, deaths and abuses, whether they occurred intentionally or unintentionally. Call our Chicago nursing home abuse lawyers 24 hours a day at (312) 243-9922 for free, no-obligation information.