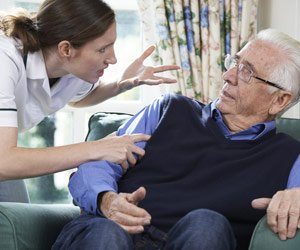 Compared to other forms or abuse and neglect, the physical abuse of the elderly or other residents of nursing homes is sometimes much easier to spot. Bruises, bumps, cuts, broken bones, bed sores, and other physical manifestations of physical abuse are often present and are clear signs that warrant further investigation. A doctor can then examine these physical injuries, speak to the elderly resident and help determine if they were the result of an intentional abuse or whether they were an innocent accident.

But, the mind is a mysterious place that does not display bruises and breaks. One cannot walk into a nursing home and quickly determine which elderly patients have been the victims of psychological or emotional abuse. Consequently, it is of the greatest importance that family members and friends remain vigilant at all times for warning signs when visiting and speaking to residents of nursing and inpatient facilities. If you suspect that your loved one is being mistreated in a nursing home, the Chicago nursing home psychological abuse lawyers of Sexner Injury Lawyers LLC can help you through the challenges of holding the abusers accountable. Contact us at (312) 243-9922 for a free consultation.

The effects of psychological abuse vary greatly from person to person. Some abuse victims may become withdrawn or more timid, while others may become overly aggressive and confrontational. There is no specific set of reactions that is true for all such victims of abuse.

Signs of psychological abuse can certainly be difficult to identify, and a family should never feel responsible if they are unable to quickly spot these warning signs. But, after continued exposure to such harm, these are some of the most common such warning signs:

The psychological or emotional abuse of nursing home or institutional patients can take many forms. But in general, they can be divided into two basic categories, verbal and non-verbal.

This type of abuse involves verbal yelling, harassment, and emotional attacks on the elderly or infirm victim. If the family member is present when this occurs, it can be quite obvious that such psychological abuse is under way. The vast majority of abusers who work in nursing homes will take great care to treat patients with respect when family members are present. Only when relatives have gone does the abuse begin. So, as with any other type of suspected abuse, it is greatly important to watch for warning signs. Some examples of verbal abuse include:

Psychological and emotional abuse of a patient can happen anywhere. It is not restricted merely to residents of nursing homes or inpatient facilities. It happens just as often in hospitals and medical offices at the hands of doctors and nurses. It is not limited to the elderly or to those with a diminished capacity to defend themselves. But, it is true that those in the weakest position to take care of themselves are often those at the greatest risk for abuse.

Although abusers generally prey upon the weak, ultimately it is not the characteristics of the abused that make abuse more or less likely. To suggest so would imply some aspect of culpability on the part of the victim. More accurately, it is generally the characteristics of the staff member or caregiver that more likely predicts whether abuse is likely to occur. In many medical establishments, nursing homes and inpatient facilities, the staff is underpaid, understaffed and undertrained. Some medical staff suffers from depression themselves, struggles with drug addiction, or has serious financial problems, while others have a history of violent aggression or psychiatric issues themselves. As you might imagine, these members of the medical staff are at much greater risk to take part in abusive behavior against nursing home residents.

Prevention and Reporting of Nursing Home Psychological Abuse in Chicago

Carefully selecting caregivers and nursing home facilities and then diligently watching for warning signs is all that can reasonably be expected of family members. Hopefully, psychological abuse can be avoided when this is done. In the event that abuse is detected, it is very important that the family immediately report such illegal behavior to the governmental agencies in charge of regulating nursing homes and simultaneously contact the experienced legal team at Sexner Injury Lawyers LLC. The Illinois Department of Public Health (IDPH) is certainly a good place to start and they will likely perform an inspection or investigation once you have filed such a complaint.

But of equal importance, contact a Chicago nursing home abuse lawyer at Sexner Injury Lawyers LLC by calling (312) 243-9922 any time of day or night for immediate professional assistance to hold wrongdoers responsible. There is never a legal fee charged unless we are successful on your family’s behalf. Many millions of dollars have already been collected for our clients. Call today.

All rights reserved. Copyright © 2023 by Sexner Injury Lawyers LLC
Disclaimer: Information contained herein is intended for informational purposes only and is not intended to create an attorney-client relationship. Any use of this information is at user's own risk. Consult a lawyer first if professional legal advice is required. Referral of cases to other well qualified attorneys may occur after full disclosure. As all cases are different, results may vary. Advertising material. Please refer to full disclaimer. We represent clients in Arlington Heights, Chicago and throughout Illinois.