Home > Blogs > Why Are Many Defendants Sometimes Sued Over a Single Injury?

Why Are Many Defendants Sometimes Sued Over a Single Injury? 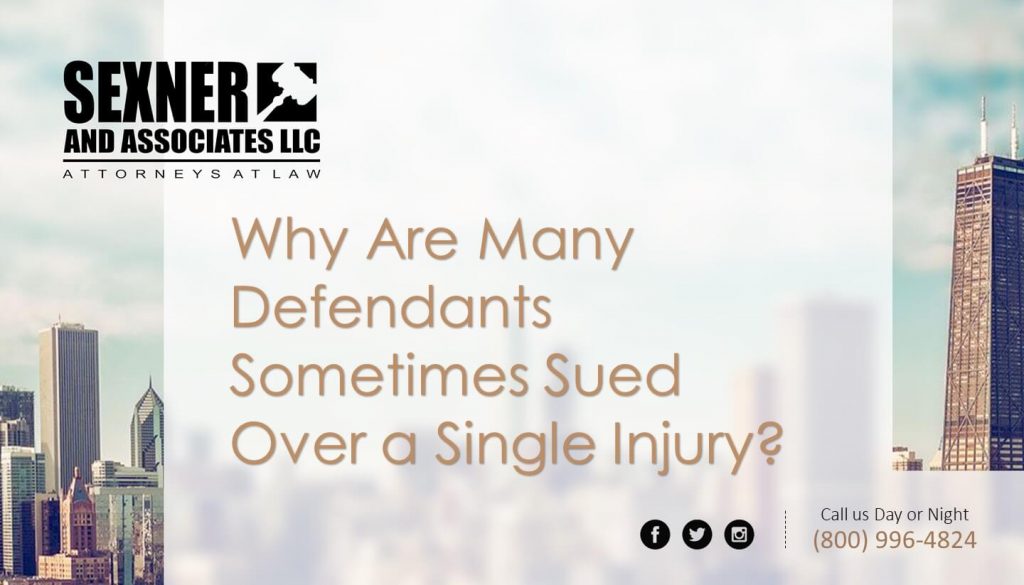 In a recent case filed in Joliet, Illinois, a woman’s attorney sued no less than six defendants in a single wrongful death lawsuit. She alleged that the negligence of many others may have contributed to the death of her late husband.

In this particular case, the deceased man had been on a golf outing, during which alcohol had been served. According to the lawyer for the case, a school bus had been chartered at least partially so that the golfers could avoid the risk of driving under the influence on their return.

During the trip, something terrible happened. The man fell against the bus door while it was traveling at a relatively low rate of speed and the door flew open, throwing the passenger to the pavement below.  By the time that he had been flown to St. Francis Medical Center, he was in critical condition due to serious head trauma and major injuries. He died about a week later.

It’s Often a Good Idea to Include Multiple Defendants

But injury and medical malpractice cases are often far more complicated and lend themselves to suing multiple defendants. In the golf-outing case example above, the defendants included two trucking companies, a school bus company, the bus manufacturer, the bus door manufacturer, and the school bus driver.

The reason for including so many possible responsible parties in a lawsuit is that it is the responsibility of the attorney to cover all possibilities. Once a lawsuit has been filed, the attorney may later be unable to amend (to fix) the pleadings (paperwork).

So, if a responsible party is left off, it may turn out that the plaintiff (person filing the lawsuit) receives no compensation at all, because the correct party simply was not sued. As such, it’s always better to be safe than sorry. If there is any reasonable possibility, based upon the available evidence, that some person or some entity may be at least partially to blame for the harm, it’s always recommended that such a party be added to the lawsuit as a defendant.

The attorney can always drop that party from the lawsuit at a later time, if it turns out to that party is not at fault.

What about a car accident? Although in some circumstances, a single person may be the subject of the lawsuit, multiple defendants are very common in car crash cases.

For starters, the lawyer would not only sue the other driver, but the driver’s insurance company. If the other person was driving for work, that person’s employer would likely get sued. If other cars were involved in the crash, each of those drivers and their insurers might be included. What if a pedestrian had stepped out into traffic causing the accident? Then that person should be included.

Sometimes, a driver may blame the accident on a faulty automobile. Such lawsuits are referred to as products liability lawsuits and involve suing the car manufacturer or an automotive parts supplier claiming that they were responsible in some way.

Sometimes, a city such as Chicago might even be sued based upon negligent road maintenance, construction, or planning that contributed to the accident.

In the case of medical malpractice injuries or deaths, the number of parties who are subject to such a lawsuit is likely to be even greater. If surgical negligence or a failure to diagnose a medical condition is alleged to have occurred, it is incredibly important that the malpractice attorney cover all bases and include every possible defendant.

It’s often been said that when such a lawsuit gets filed, it’s not uncommon to “sue everyone including the nurse who turned on the light switch”. Although that’s an oversimplification and no one should ever be named as a defendant without just cause, the importance of naming all possible defendants cannot be overstated.

Doctors don’t operate in a vacuum, so it would be unusual to name just the doctor on a lawsuit.  They sometimes work for themselves, but often are members of a “medical group” or they are employees of a hospital. Other doctors are often consulted during the patient’s treatment. Nurses assist with the course of medical treatment. Procedures that take place in hospitals or outpatient locations utilize the medical staff, machinery and facilities provided.

For all these reasons, hospitals, nurses, and medical groups are frequently included defendants in medical malpractice cases.

If you have questions about whether you have a potential injury lawsuit, or which defendants would likely be included in a such a claim, call Sexner Injury Lawyers LLC night or day at (312) 243-9922. Our experienced attorney can answer such questions free of charge or obligation.